A Peek into December... How do you turn a square piece of paper into a beautiful candy cane??  We had a lot of fun discovering the process.  We took a square piece of paper and colored the outside edges of it with red marker (about a quarter of an inch).We flipped the paper over, and started rolling the paper around a pencil starting at a corner.  The kids were amazed when a beautiful striped stick emerged.  They wanted to make more and more and more.  Some kids ended up making some beautiful rainbow striped canes!! So much fun! 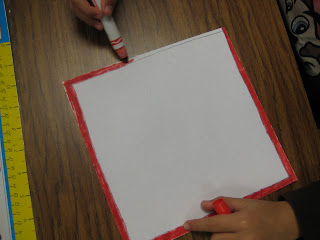 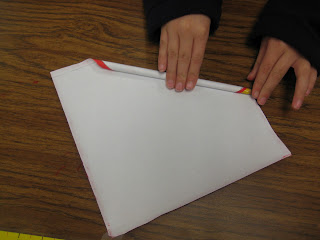 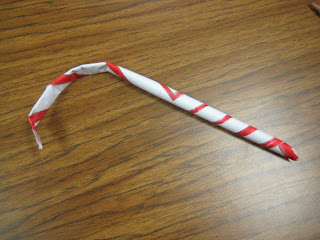 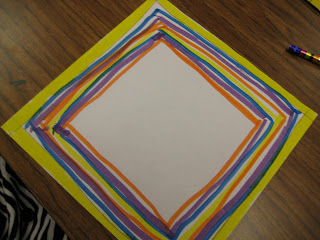 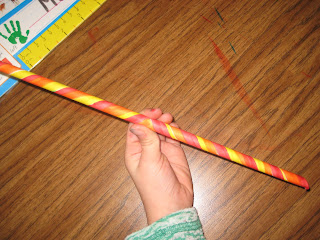 If you are one of my VIK parents and you have not opend up the gift your first grader made for you, please scroll past this next section :).  We worked hard on our gifts for our parents the week before school got out.  We bought some simple off white plates and hade the kids paint a light blue sky background using acrylic paint and cotton balls. When that dried, we painted a snowman head using white acrylic and cooton balls. We added some snowflakes using a cotton swab.   We let that dry and then painted the sweet face using cotton swabs and a foam brush.  Spraying the entire plate with a clear acrylic spray helps everything stay put.  The kids then wrote with pencil the cute saying and then traced over their letters with a sharpie.  We hot-glued the fabric on to look like a scarf and...... Ta-Da!!  Finished!  The kids are so proud of their hard work and can't wait to surprise someone special with their gifts!!  Great job, Kiddos!!!  Merry Christmas, families!!!! 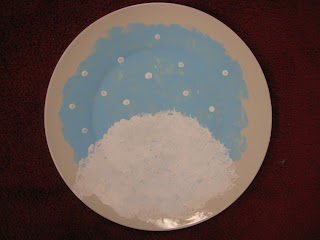 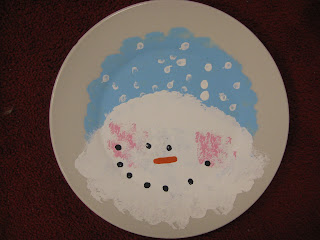 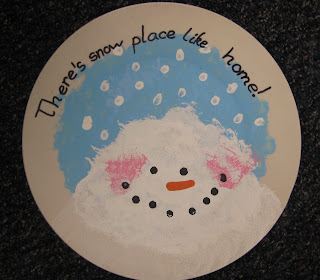 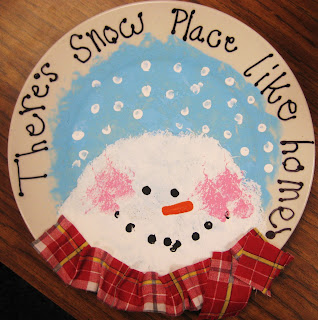 As I enjoy a few days off  with my family to celebrate this wonder-filled time of year, I am sending thoughts of a joyous holiday season to my school families!!  Stay safe and see you all soon!
Have a happy tomorrow!
Jofully!
Nancy

Posted by Nancy VandenBerge at 7:56 AM 3 comments:

Email ThisBlogThis!Share to TwitterShare to FacebookShare to Pinterest
Labels: Christmas

A Peek into Grinch Day... I've been busy planning for Grinch day for a while and it finally arrived last Thursday! Kids were invited to come dressed in green and were able to wear Santa hats if they wanted. Because it was also "Think Outside the Box Thursday" for morning warm up, I had the kids start with 5 green dots and a piece of paper.  They could create anything they wanted.  My kids always surprise me with what they create!! 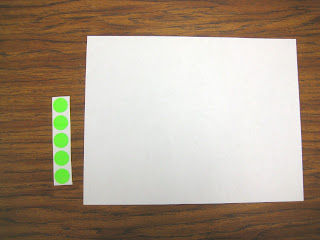 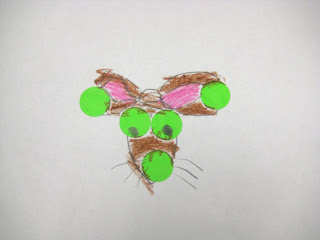 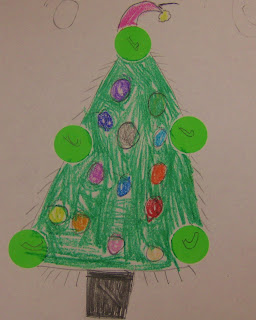 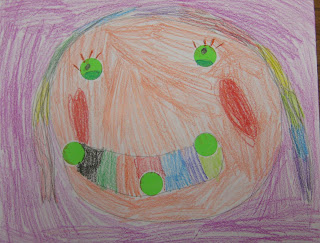 After Calendar time, we enjoyed practicing our addition facts with a grinch dice game.  Paired activities always show me so much about how kids work together. 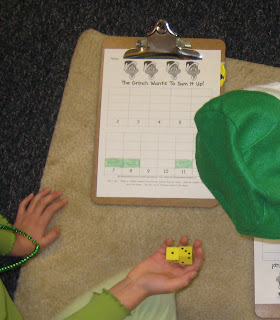 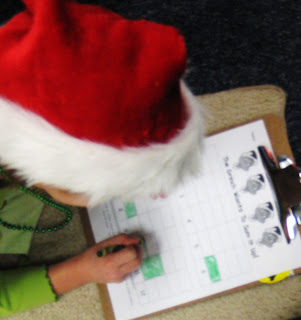 We practiced our "words to know" with spaghetti...green spaghetti, of course!  If you want to try this, simply cook spaghetti noodles and drain. Add a couple drops of green food coloring to about a teaspoon of oil and mix into wet spaghetti.  Some kids loved the feel.  Some wanted to eat it!  Some wanted to take it home and feed it to their little brothers!!! :) 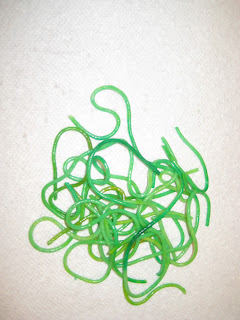 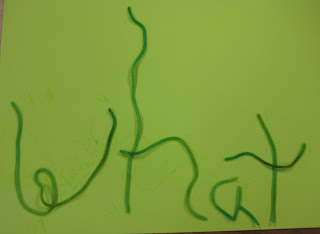 It was finally snack time.  My kids got so excited when I told them they were going to make their own snack today. Who Pudding!!! I happened to find some color changing pudding mix, that actually turns a grinchy shade of green when milk was added.  I gave the kids 2Tablespoons of milk in a small cup and 2 teaspoons of the pudding mix in another small cup.  They mixed them together and stirred for one minute with a spoon.  They were amazed with the color and dove right in for a taste!!!  Most kids loooooved it and were excited to get the recipe for Who Pudding to bring home! 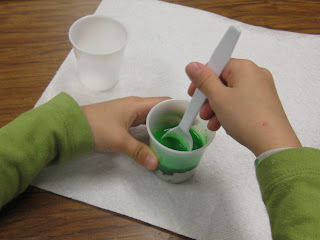 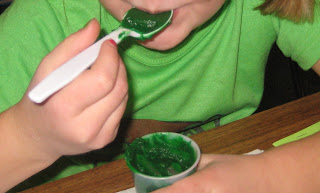 We, of course, read the well loved Dr. Seuss book "How the Grinch Stole Christmas" and talked about why the grinch was so grumpy. This led to a discussion on  what makes us grumpy or grinchy, and then what makes us happy.  Great insights into my sweeties' hearts!!
It was then time to include some science into our day.  We have been working on the properties of matter, so of course we had to make some gak!  I renamed the substance "Grinch Grime."  Each table group mixed 1 teaspoon of borax powder (in the laundry section of the store), and 1 cup of water in a container.  They then mixed 4 oz of Elmer's glue (I used clear glue) and half a cup of water in another container.  They added 2-3 drops of green food coloring to the glue mixture and stirred. Both containers were then mixed together. The Grime got very thick very fast. The kids commented on the fact that everything started off a liquid and now was turning into a solid.  YAY!  Each kiddo got to take some home in a resealable container. Soooo Fun!!! I sent the recipe home and many kids came the next day and told me they were going to make some more at home! 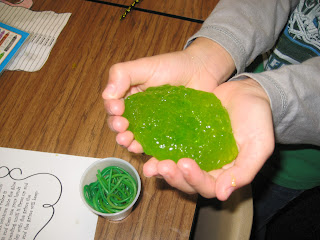 OH! Can't forget the Grinch song we learned (written by DeannaJump), and the Grinchy word pointers we got to use as we learned the song!!  I found some green plastic icicles at Walmart that were perfect for that task! We put all of our treasures into a Grinch Folder labled with the lesson the Grinch learned in the story!! 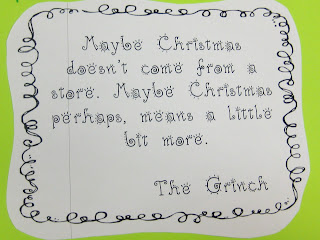 We had a fabulous day, learned a lot about how characters in stories change  and the connections we can make with the characters in books!!  Thanks for taking a peek into our Grinch Day!!

A view from today... We have been working very hard on fact families.  This week we decided to incorporate the practice into the season by creating math mints.  The inspiration of course was starlight mints with the red and white stripes.  The kids drew swirled lines coming from the middle of the bottom of two paper plates (just the cheap plates!), and then colored every other one red. I gave the kids two numbers for each plate.  They had to derive the four facts (two addition and two subtraction) from those numbers.  The facts were written on the white stripes of each plate. We glued the plates together, top to top and wrapped  the mint with clear wrap.  Kids helped each other tie yarn around the ends and we trimmed the edged.  Voila!!  Math mints! They look cute hanging up in the room! Simple, easy, cheap, fun! Try it!
Happy tomorrow!
Joyfully,
Nancy 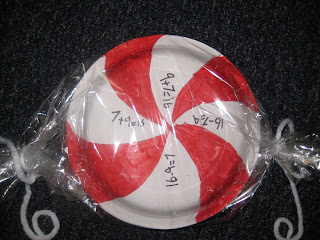 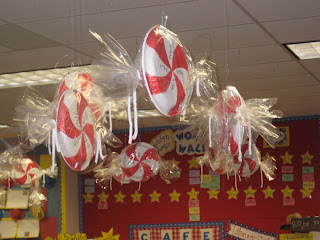 Posted by Nancy VandenBerge at 10:44 AM No comments: 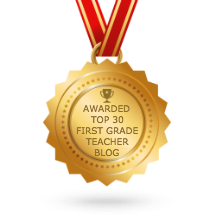